With Ratchet And Clank rift apart on the upcoming PlayStation 5, People are going to have two distinct choices …

Ratchet and Clank Rift Apart has some latest exciting news. The game is coming exclusively to the PlayStation 5.

However, The answer doesn’t clarify as to exactly how much lower the higher frame rate mode shall actually be. It could be derived from this that the developers could still be working to maintain the perfect balance between raw pixel density and stability.

With early adopters looking forward to it being one of the first games available, the game has become one of the most awaited games for the PlayStation 5 console.

It seems the game would be pushing the PlayStation 5 to its limits, as it sure looks promising and a feast for the eyes.

As it’s now been told that the game supports 4K resolution and is capable of running at 60 frames per second. But only one option at a time.

On ResetEra, translated by fans,

‘In this game, we’ve focused on balancing the comfort of the action with beautiful graphics while allowing players to choose between two different resolutions and frame rates,’ they explained.

Is Ratchet and Clank Rift Apart Only Game Offering Choice?

Not only this game but also for other Insomniac games such as Spider-Man: Miles Morales, A similar option will also appear in this game, which is another promising PS5 game.

Assuming that with some of the effects in the game lowered or turned off the performance mode allows the players to still run the game at 60fps in 4k.

While The PlayStation 2 Ratchet and Clank games ran at 60fps, the PlayStation 3 Insomniac games dropped this, which ran at 30fps in order to run better graphics.

One choice that prioritizes frame rate while the other focuses on graphics, Many shall welcome the comeback of 60 fps gameplay as a new taste but notice the fact that there are two separate options. 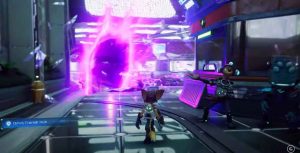 One could say that after looking at these two options, PS5 is not as much powerful as some were expecting.

Insomniac Games is not the only one giving performance options. With many Xbox One and PS4 games offering various different framerate and resolution options, Performance modes in console games are becoming more and more common.

For example, The recently released action-packed third-person game Ghost of Tsushima, lets players lock the framerate to a solid 30 fps by lowering the resolution to 1080p through the performance mode.

Also, some Other games, on more powerful hardware, can allow for better performance by offering the ability to turn off the framerate lock entirely such as;

Bluepoint’s Demon’s Souls remake. This game is also stepping up and offering performance modes for its games.

But, the games which shall be launched after the release of the next-generation consoles can manage to offer both the performance mode options at once, still remains to be seen in play. This could be the Selling point of a upcoming PS5 Pro, one can surely make this argument.

During the ‘launch window’ of the PlayStation 5, Ratchet and Clank Rift Apart shall be released.

Continue Reading
You may also like...
Related Topics:ratchet and clank rift apart

Cheer Up, Scarlet Nexus Is Here!
Get Ready To Implement New Smart Strategy With Age Of Empires 3 Remaster!
To Top