All About New Fall Guys Update

If anyone had a busy month that would be Fall guys. A major update next week is due for Fall Guys. The new update that is on its way that will bring some selected changes to the weapon-less battle royale game, The Fall Guys.

Other than a few tweaks, the Fall Guys update is also bringing some solutions to the everyday bugs and glitches.

You may call Fall Guys a comparatively simplistic game. No doubt The Fall Guys is continuously on the rise. fans just can’t get enough of the fun with Fall Guys. They want more and more content. New content is being added such as new cosmetics, new levels –already promised, and even a few new fun features. but at the end of the day, it’s just a game it constantly requires bug fixes and balance updates from time to time. So Before any major updates are dropped, smaller updates are being released by Mediatonic to eradicate irritating glitches and bugs.

A new major update is releasing Fall guys in a week’s time, and there are a number of changes and tweaks that players should be aware of. This was announced by the official sassy Twitter account just recently.

Today on Sunday, 23 August the Fall Guys developer team released a few early patch notes for the next update for fall guys.

The update is titled in a hilarious way as ‘Spicy Hot Fix’ which will, as discussed above, see some irritating issues being eradicated also tweaks for the mini-games.

The ‘Spicy Hot fix’ for Fall Guys shall include fixing a problem with the camera auto-panning and one major issue which is, during the Slime Climb mini-game and Jump Showdown,  players being unable to grab certain obstacles, and addressing a number of frequent bugs which lead to crashes.

The Update adds that once you’ve qualified, instead of randoms, you’ll be able to see your party members if they are still going for the obstacles and haven’t qualified yet.

Achievements and Trophies are being modified to be properly set up for all languages. Also, for spectator mode, the party members shall be sorted first.

Players also complain about the Fall Guys being a little unfair and hence being frustrating. The update also deals with players complaining and concerned with the dominance of the Yellow Team in team games by removing the speed nerf.

The round-selection algorithm has also been improved. Now team-based games will only be picked when the team sizes are equal.

All of these and the famous “top-5” crash issues have been fixed have also been fixed.

After the update, thankfully, there’ll be surely less of the more common bugs and crashes to worry about.

The new update of Fall Guys will be for PC and PS4 users.

With the changes, might also come to some challenges such as, as mentioned above, since a team game cannot be chosen if the team sizes can’t be equal so we should see possibly a lot fewer Team games because many total numbers of players are not divisible by four in particular.

This is another big “nerf” to Team games. Now we can’t get two Team games in a row in one session because The Fall Guys have already made it.

As for PS4, the update has enabled inverted control for users. Now users can at last play the game with sensitivity settings of their choice and an inverted X/Y axis setting as well as. For older PS4 consoles, i.e. the other than PS4 pro, The UI should also run more smoothly.

Everything wrong with the Fall Guys won’t be fixed with this update, Obviously.  But it seems that developers are making sure that Fall Guys run smoothly.

The update is expected to roll out within the next week. Mark your calendars for August 25, for Gamescom as Season 2 of Fall Guys will be revealing at it. 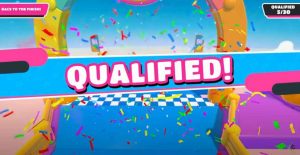 We can have our hopes high to see new costumes and modes. There’s another exciting news as Its developers are interested in seeing the Fall Guys get the Lego theme, if the toy company is on board, with them.