The Nile River is not only the longest in the world, it is also of enormous importance to Egypt, especially in antiquity. In the period of the floods, the River Nile came to overflow, and therefore fertilized the land, contributing to the development of the region. Therefore, visiting Egypt is still receiving these vibrations today. And visiting Egypt without taking a Nile River cruise is almost unforgivable.

A trip to Egypt is everyone’s dream. Who has never heard of Cleopatra or the great Tutankhamun? Obviously, the pyramids are the country’s great ex-libris, but walking the Nile River is a unique experience, as it allows you to immerse yourself in millennia of history. Furthermore, the treasures of southern Egypt are some of the best kept in all of North Africa.

There are several advantages to taking a cruise on the Nile River. First, because it allows you to see several places of great historical and patrimonial value, built during the time of the pharaohs; secondly, because we are talking about one of the most important rivers in the world, with incredible biodiversity; and last because it allows you to relax and feel extremely comfortable, while discovering the best of Egypt. 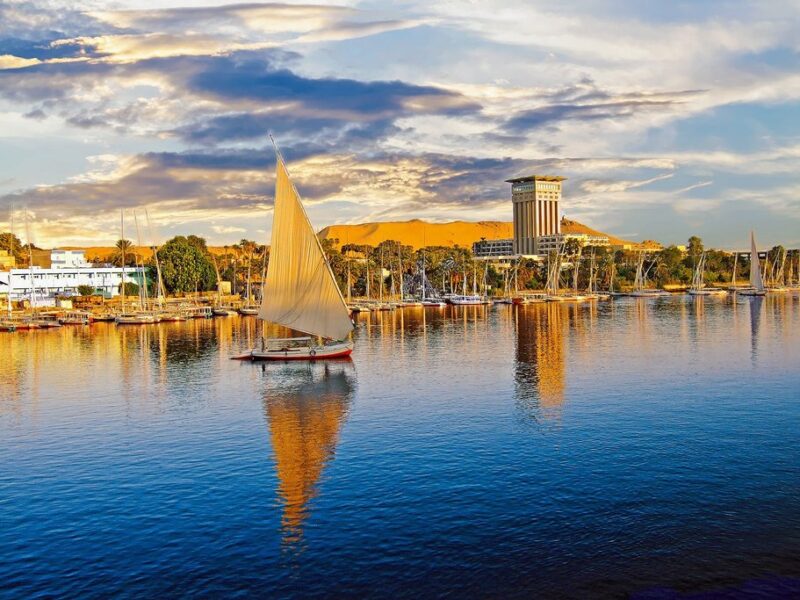 One of the most interesting moments during the Nile River Cruise is the passage through Esna, where the ship waits until the water level rises and equals that on the other side of the lock so that the boat can cross. During these minutes, sellers approach in small boats and throw bags with clothes for the cruise, if you are not interested in buying anything you can throw the clothes back to the sellers. If you want to purchase a part, you can pay one of the ship’s employees.

Most Nile River cruises route between Luxor and Aswan or vice versa. Regardless of the route you choose, you can experience the same attractions – the great Egyptian treasures. Starting with Karnak, the largest temple complex in the world, and of course, the Luxor Temple. By the way, in Luxor you can’t miss the Temple of Hatshepsut and the Valley of the Kings, where the great pharaohs of ancient Egypt were buried. 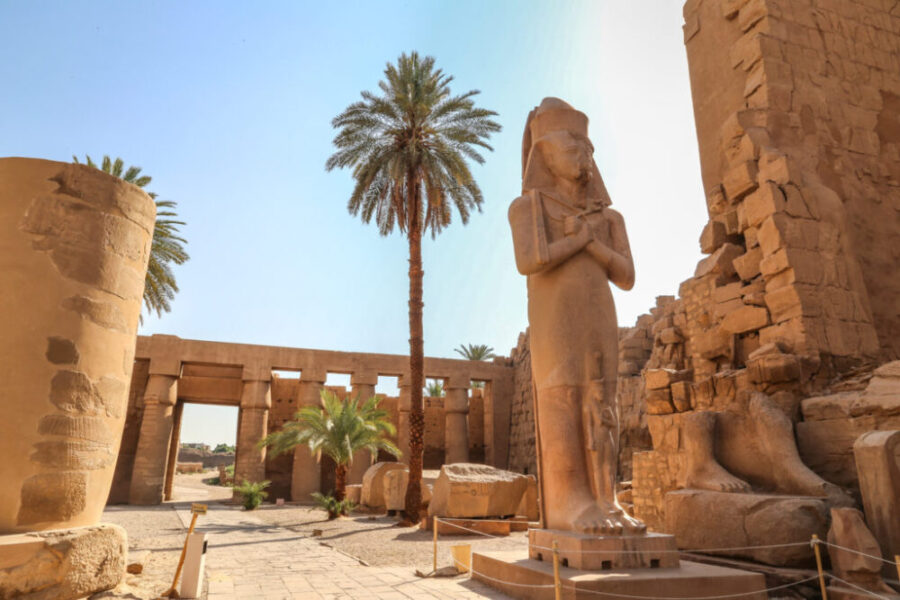 In Aswan, the treasures of Egypt will surprise you too. The Unfinished Obelisk is probably one of the city’s highlights. This was never completed because cracks began to appear in the rock, which jeopardized its stability. It remains thus tumbled down in the city’s quarry, intact in its pink granite. It is 42 meters long, which would make it the largest in the world if it had been completed.

Still in the city of Aswan, you cannot miss the Philae Temple, dedicated to the goddess Isis. This was the goddess of fertility for the ancient Egyptians and was Cleopatra’s favorite of hers. To avoid flooding, UNESCO drew up a plan to relocate it to a small island, where it is now fully preserved and safeguarded from these harsher weather conditions. 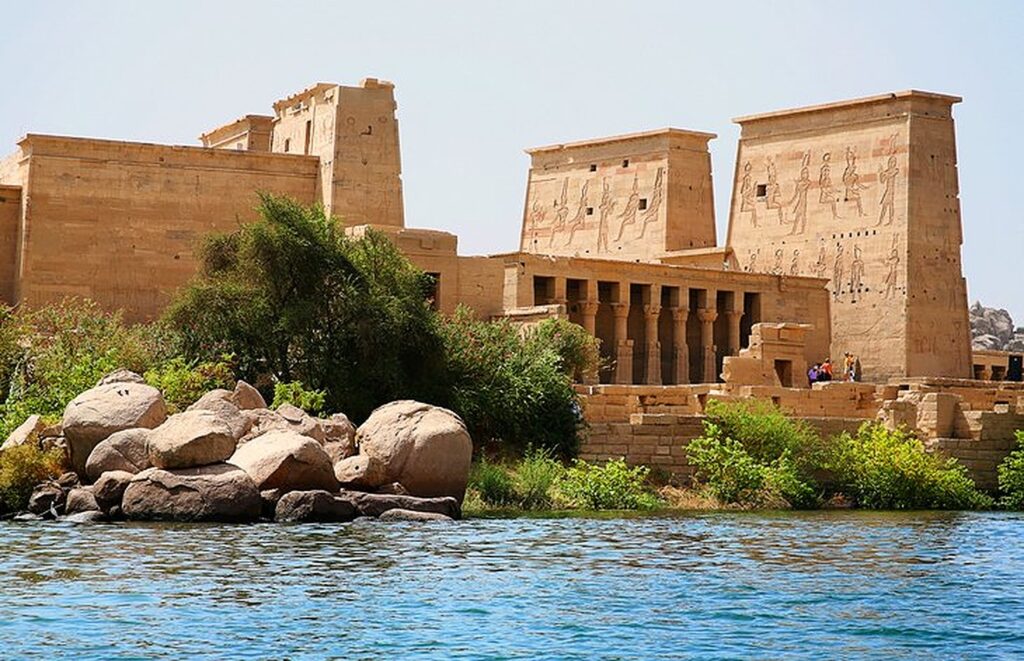 In addition, you should take advantage of the stop in Aswan to do the typical felluca ride. This is one of the most memorable experiences of those who go down the Nile River on a cruise to Aswan. The felluca, which in Portugal originated the typical falua, is a traditional wooden sailing boat widely used on the Nile, but also in areas such as Iraq and Sudan. Riding the Nile by felluca is a journey of tranquility and peace, while soaking up the best of Egypt.

But a cruise on the Nile River is also made of small gestures. The monumentality of the great buildings of the pharaohs is impressive, but soaking up the culture and life of the locals is a priceless experience. Therefore, during the cruise, you will have the opportunity, for example, to visit a papyrus factory, to see how this masterpiece was produced, which allowed the development of writing and the Egyptian alphabet. 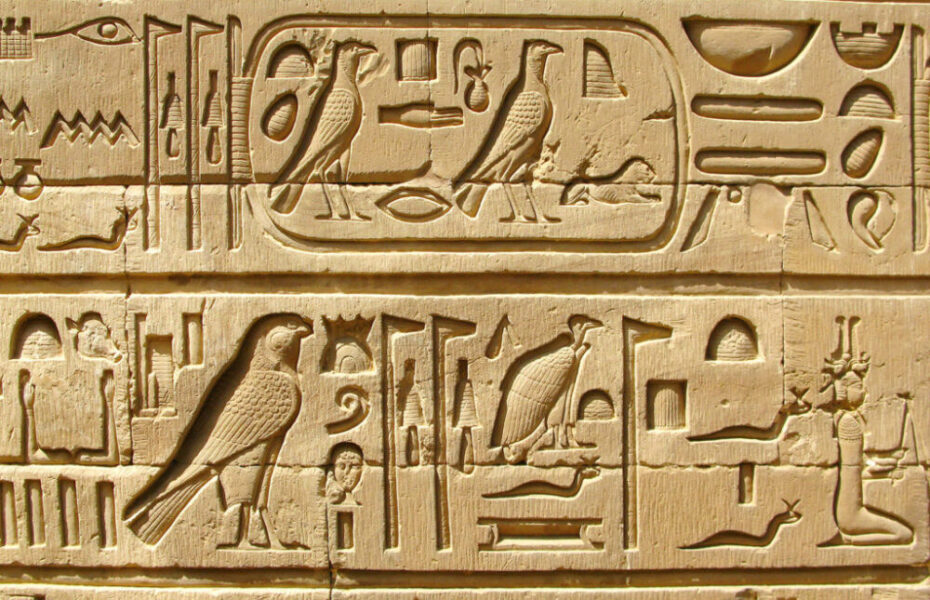 Or, for lovers of essential oils and perfumes, a trip to a perfumery is something unique. After all, Cleopatra and the pharaohs were lovers of the scents of perfumes and in these establishments you can find out which were the favorite scents of these names in history.

As you can see, there is no shortage of reasons to go to Egypt. But if you do, you already know, don’t miss a cruise on the Nile River and the treasures of the south of the country.