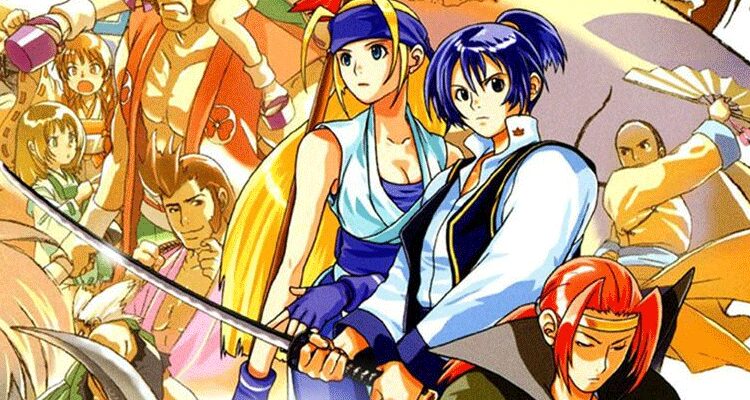 The Last Blade is a fighting game series developed by Japanese gaming company SNK. Its first installment was released on December 5, 1997, for arcade and SNK’s NEO GEO home consoles. The series is considered one of the most accomplished games on NEO GEO platform.

By the time of the release of The Last Blade, SNK had already released several super hit fighting games. The likes of which, Fatal Fury, Art of Fighting, and Samurai Shodown. These fighting games are considered to be most influential for fighting game genre in general among some other Japanese titles.

The Last Blade became an instant hit and quickly developed a very loyal fan base. The success of the game was a combination of multiple aspects; game’s story ark, amazing graphics with smooth animations. The game was released with a different name in Japan, “BakumatsuRōman: Gekka no Kenshi”.

The game is set in the late period of the Tokugawa shogunate era in Japan. The story revolves around Japanese mythology of life and death.

The story starts before the start of humanity before the existence of death. But when death arrived at the land for the first time the “Messenger from Afar” was born. As time passed, with Sealing Rite, death was sealed behind the Hell’s gate. That’s how two worlds came into being. Then life and death’s history began. The four symbols which can be seen in the game are four Gods who protect the Hell’s gate. These four Gods are Seiryu of the East, Byakko of the west, Genbu of the North, and Suzaku of the South. These four Gods protected the gate in the shadows, over time people forgot about their protectors.

In the Bakumatsu era, Tokugawa Shogunate is crumbling to get hold on to its territory after 200 years. Suddenly an unusual natural disaster occurs, rumored to be “Majin Revival”. A foretelling that Gods will walk among mortals again, to wreak havoc on them. Now the land of peace is in despair. Some people took their journey in their own hands against in this struggle. These people are ready to fight and find the cause behind this disturbance.

The last blade introduced a completely novel feature at the time, the game included fighting modes. This allowed players to choose according to their preference and added a layer of customization, never seen before in the fighting genre. These modes were Power and Speed mode. In Japanese speed mode was named as Technique mode.

Speed mode allowed players to perform several smaller attacks together in the form of a special attack which was called desperation or super move. players could also perform a speed combo as well. This speed combo in the Japanese version was named as “wild dance”.

Power mode on the other hand lets players use a single attack or land a specific combo that takes up a lot of opponent’s power. Thus attacks in power mode are more damaging. This mode allowed players to use super desperation moves.Gameplay interface was very intuitive, there was another bar which started flashing as an indicator showing the optimal levels of using the attack. Power mode also includes cancelation of a move, called “Super Cancels” or “Sublimations” in the Japanese version of the game.

Consecutively blocking enemy attacks causes the player’s character to lose hold of their weapons as a “guard crush penalty”. Every character has its animation when loosing hold their of there weapons. Except for the characters “Musashi” and “Kagami” as they are the final bosses of this game. This also applies to both of these characters even if they are controlled by the player.

Many characters of the game take inspiration from Japanese comics(manga), Rurouni Kenshin. Developers did it intentionally. They wanted to state a friendly nod to the mangaka for being a fan of Samurai Shodown.

The game has 17 playable characters.

Kaede is the main protagonist and the youngest adoptive son of a warrior named Gaisei.

Gaisei also trained him, he became a skilled swordsman and powerful warrior. He is in search of his father’s killer. He believes his older brother, Moriya, murdered Gaisei. Moriya is a possessor of Seiryu, one of four gods in the game which protected the hell’s gate.

He is the other adoptive older son of Gaisei and is also trained by him. For a long time, they happily lived together with Kaede and Yuki learning Bushidō., until the day he found the body of his dead master and father, Moriya was also blamed for it. He is also determined to find the real culprit, like his brother Kaede.

Okina no Genbu an old man, guardian of the demonic portal known as “Hell’s Gate”. For years, he and the other three guardians stood to watch over its seal. For many years, it was peaceful and Okina resigned himself to fishing and the complacent life of a hermit. He was found by Kaede and takes him as his pupil. He also is one of the Four Gods, as a possessor of Genbu.

Akari Ichijou is a descendant of onmyoji family. She wants to seal the Hell’s gate and cure her sister of a mysterious illness. She is helped by her adoptive brother Juzoh.

Juzoh Kanzaki is the brother of Akari, he was knocked out and kidnapped by her, she took him as her adoptive brother and “persuaded” him to accompany her on a journey to discover the Hell’s Gate.

He is a young man who has a strong love for fate, women, and the thrill of the fight.

He is a Chinese Shaolin monk who learned a special form of Martial arts that allows the user to control fire and involves the use of Chinese fans and powerful kicks. One day, he witnessed a “red star” which was the opening of “Hell’s Gate”. Knowing it to be a sign of great evil, he travels from his homeland of China to stop the evil before it spreads across the world.

Zantetsu is the leader of the “Kisaragi” clan, during the Bakumatsu era an age when the ninja class was in decline. Determined to prove the superiority of his people, he challenges warriors time and time again to prove his strength and skills. When he hears of the opening of “Hell’s Gate”, he is set out to defeat the enemies within to prove his strength.

Keiichiro Washizuka is the unit leader of the Shinsengumi, a police-like group during the Bakumatsu era. He is a firm believer in restoring order to Japan and in the old ways of Samurai sword fighting. He carries a very serious persona. He is extremely loyal to his Shinsengumi unit. His friend Kojiroh Sanada, who is brutally murdered during the opening of the hell’s gate.

Shigen Naoe is another guardian of the “Hell’s Gate” and he is a possessor of Byakko, one of the Four Gods in the game’s mythology. He is magically sealed in a massive stone for ten years by his friend Shinnosuke Kagami, who perceived him to be a threat in his plan for opening the gate. He eventually escaped, but clouded by his rage and anger, he could only think of getting back at his captor and set out to exact revenge.

Shikyoh is a former member of the Shinsengumi, he was expelled by Washizuka for his beliefs of killing as many people as he could. He is the killer of Kojiroh Sanada, a fellow Shinsengumi member. Kagami (final boss of the game) tells him to go to Hell’s Gate to fulfill his bloodlust.

Kojiroh Sanada is a former Shinsengumi captain of the fictional Unit Zero, which investigated demonic forces in Japan, following the concept of Bushidō. He was ordered to investigate the “Hell’s Gate” and to dispatch the exiled member, Shikyoh.

A new version of Akari, who is actually a tanuki in disguise.

Deku no Shigen is a doll made to replicate Shigen’s actions. He was subconsciously created by the real Shigen, who is still sealed away behind the hell’s gate.

Musashi Akatsuki is the sub-boss of the game, is a dead swordsman who once traveled the countryside, honing his skills and challenging worthy opponents along the way. He was resurrected by Kagami as part of his plan to open the Hell’s Gate.

He is the final boss of the game, is one of the guardians of Hell’s Gate. After residing over his position and finding (or so he thought) that the humans he protected were weak and inferior to himself. He decides to release the seal on the portal. He goes on a horrific killing spree, murdering various warriors, including Gaisie, the adoptive father of Kaede, Moriya, and Yuki. He is the avatar of Suzaku, one of the Four Gods.

The next title in the series (The Last Blade 2) was released in 1998. The story kicked off 1 year after the prequel. It picked from the fight between good and evil. Gameplay remained generally the same with improved resolution and smoother animations. Characters can no longer be unarmed.

A new mode was also introduced, called EX for extreme. It was a combination of speed mode and power mode. Every mode had its unique color and typeface. Power mode now allowed a strike which was an unblockable guard break. Other than that there were no changes in the sequel.

The new characters introduced in the game were:

She is the daughter of Genzō Takane, a renowned swordsmith known throughout Japan during the Bakumatsu era. She is searching for the silver-haired man that requested the final blade her father made and protect her family’s legacy.

Being believed to be the “Messenger from Afar”, he requested a blade to be forged from Hibiki’s father. He is out to stop Hell’s Gate from ever closing, and seeks to kill the sealing maiden, Yuki. He was a spirit in the Makai filled with an insatiable need to kill, unknowingly released by Kagami through the Hell’s Gate.

She is the sister of the late Kojiroh Sanada, who disguises herself as him, using his identity to investigate the evils within, as well as to restore the faith in the Shinsengumi. She seeks to finish off the zombie form of former member Shinsengumi, Mukuro, who killed her brother.

The zombie version of Shikyoh, wanders the land in his undead form, continuing to kill innocents.

The normal version of Kaede, before his transformation.

The Shikigami summoned by Akari Ichijou in battle and fights by imitating the enemy.

She is the daughter of Shigen Naoe.

The final boss of the game and the resurrected version of Gaisei.

Both of the games are still loved by hardcore fighting game fans. Both games were released for newer generation platforms as well, the likes of which are PS2, PS4, and Nintendo Switch. The local championships are held in Japan every year in which many people compete for a prize.