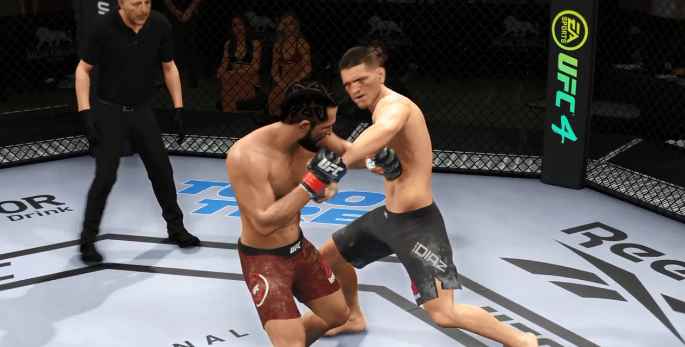 The dynamic and gruesome fighting game ‘UFC 4’ By Electronic Arts Sports was released last month. The game earned itself a good number of sales and reputation.

UFC 4’s previous titles also featured advertisements but they were normal. Recently, A new update for the wild fighting game ‘ UFC 4’ By the EA Sports, added advertisements in the game which were real life. The adds were such that you couldn’t skip them or anything no matter what.

UFC 4 Adds And What Happened To Them

This update was added in a clever way after a month of the release of the game. The advertisements were added once all the reviews were received and published so there could be no as such damage to the game’s reputation.

The adds flash irritatingly on the screen during the gameplay. Users have found adds to be frustrating

The adds were added on current-gen platforms i.e. Xbox One and PS4.

The players and fans of the new UFC 4 did not let this one slip and voiced their anger and frustration towards the developers for the in-game displaying real-world adds on a Reddit thread. The add which featured during the gameplay was for The Boy Season 2 by Amazon. The main logo of Amazon’s show displayed on top of the timer for a brief moment and disappeared while the big logo was displayed in the centre of the octagon.

One main reason for such great outrage from the players was that the adds were unannounced and they have been added after a month of the release, which means the review of the game would not mention the adds at all.

One of the players of the game captured a short clip of Amazon Show’s add appearing in the game twice, once during the replay feature of the game and secondly on the bottom of the screen.

The reaction due to this forced EA to take an immediate U-turn and and “apologise for any disruption to gameplay that players may have experienced”.

As of now, the EA has removed all such adds from the UFC 4 after the backlash it received.

If you look at it, the reaction of the players was right in its place.  and for that, they deserve un-interrupted gameplay throughout. They have paid a premium for the game. The UFC 4 fans paid a full price for the game

Anyways, EA immediately recognized the feelings and reacted in accordance with it.

EA has a history of trying out and testing some in-game adds for the game. However, we can rest assured that after the current backlash that they received for it, EA is not going to try anything similar for a while now.

As of now, UFC 4 is available for the current-gen consoles i.e. Xbox One and PS4 with all its ‘epic rough-fighting’.

However, due to the leak earlier this year, we now know that it shall also be coming for next-gen consoles in the future.

As you already know, please share your thoughts in comments.