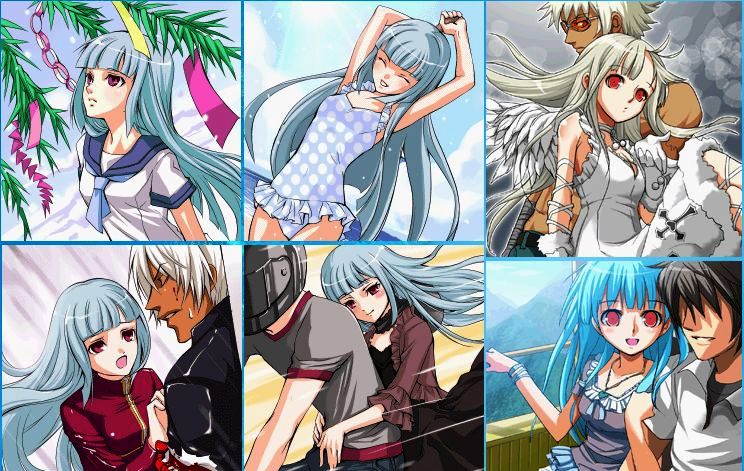 Days of memories is a romantic love simulation game series developed by Japanese gaming company SNK Playmore. These games were produced for mobile platforms such as cell phones and portable consoles. It is based on the characters from the SNK universe and some characters that make cameos are from ADK and SNK Playmore as well. It belongs to the genre of games called “romantic sims”, sims as in short for simulators.

Though romantic sims have an indie status worldwide, in Japan, the genre is super popular. In fact, the inception of the game series is based on market share. As SNK fighting games have a huge fan following of its characters. Some games started the unsilenced use of these characters, it forced SNK to make their own romantic love sim game based on the popular characters. The most relevant example would be the game “Season 365 no Omoi”, which uses many characters from King of Fighter series of SNK. So SNK reimagined its King of Fighter series as a dating simulation game.

Series was super popular in Japan as it was succeeded by many sequels adding to its tally. Days of memories are Japan-exclusive games so they are still unheard of in the gaming community in general.

The games are a series of scenario-based simulations. The characters starring in the games are from SNK, ADK, and SNK Playmore. The events depicted in all the games take place in a parallel world to their own in their respective games. The timeline of these events is mainly the 2000s.

As far as the story goes, in each game, you choose a character at the start of the game. You are given a month to make a meaningful relationship with another character of the game to finish the game. The game challenges players by asking to input personal information of the character they are trying to date. The information is usually birthdate, blood group, hobbies, and birthplace.

Players inputs this information on many interactions by the different either other characters and him/herself. Based on how many correct answers have players given, they are given a story at the end.For the character, they chose to date or given by the game.

Many of these endings break the fourth wall(Fourth wall is a phenomenon in the storytelling in which the characters of the story know they are being watched or controlled as in the case). So the character interacts with players themselves.

Days of Memories: Boku to Kanojo no Atsui Natsu

The cast of this game is fan favorites as their respective debut games were very popular. The main character is a Japanese high school student who wants to drop out.

is very popular in class as she is considered to be the Madona of class, she attends the same class as the protagonist and his childhood friend.

President of the school’s Aikido club

The cheerful overseas teacher who wants to start a band

Rich maiden who lives in the town’s mansion she is currently residing in the same apartment building as the protagonist.

She is a withdrawn girl and doesn’t have many friends. She is also the classmate of the protagonist.

Days of memories 2: Boku no Ichiban Taisetsu na Kimi e (To You, the Most Important to Me)

Debuted as the first unique Days of Memories character. The protagonist is a college student who lives in his own apartment.

Adopted younger sister of the protagonist.

The athletic and flirty who gets along with Hotaru.

Energetic girl in the same class as the protagonist.

Shrine priestess who participates in motorcycle racing in her free time.

Secretary at Hotaru’s high school, Vice is her roommate.

A strong and kind woman who is always on the job.

A pop-star idol who always needs to hide from the paparazzi; portrayed as a young adult.

A normal girl who works at a lot of part-time jobs; mainly serves as a bartender.

This game in series is set in the era of Feudal Japan, unlike the 2000s. It is the first game in the series to show where the female characters live. This is also the first game that also includes the added element of dueling to decide the endings other than usual gameplay interactions. The main character is a young samurai, hoping to perfect his technique in all of his upcoming matches.

Nakoruru: – Ainu priestess who lives in the mountains.

Mina Majikina: – a traveler from Okinawa; Chample is her only friend.

Rinka Yoshino: – a trained samurai who is always looking for a fight.

Saya: – foreigner from overseas who acts as the sister figure to Rinka.

Mikoto: – a morose resident who is constantly troubled by her worries.

Shiki: – she is a girl within the training program of the main character. She is suffering from memory loss and is also a judge in the court.

Iroha: – is the protagonist’s personal maid.

Shino: – a worker at her family’s inn (original).

Days of memories: Kare to Watashi no Atsui Natsu (Hot summer with me)

The first game in the series to be marketed as a dating simulation game for girls, rather than the normal male perspective. It’s also the first game in which the main protagonist is a female. The game also includes a “clothing system”, as certain choices can better or worsen their compatibility. The protagonist is a 16-year-old high school student, hoping to do something exciting during her summer.

Kyo Kusanagi: he is a childhood friend of the protagonist.Acts as an “older brother”.

Iori Yagami: is a jazz bassist to the local live music bar “Orochi”.

K: is a childhood acquaintance. Who often faces trouble with his memory.

Ash Crimson: is a wealthy classmate who likes to frequently pull pranks and tell lies.

Rock Howard:a member of the basketball team. He has a fan club though he doesn’t approve of it.

Alba Meira: is an American employee from the main character’s father’s workplace. He is staying here at the protagonist’s home.

Ryo Sakazaki: is a skilled martial artist. She teaches the protagonist of the game martial arts.

In this part of the series, the story is drawn around the professional life of characters at work in various jobs rather than education as depicted series so far. Characters appear in their debut games clothing. The protagonist is a professional photographer who is searching for the next big model or scoop for his studio.

King – the owner of the high-status bar named Illusion. dresses in suites.

Kasumi Todoh–she is a shrine priestess raised with traditional and dated Japanese values.

Mai Shiranui – office lady by day, vigilante by night under the alias “SHIRANUI”.

Ai – a quirky police officer who is quick to call suspects to local crimes.

Athena Asamiya – pop-star idol who is always followed by JhunHoon; Sie Kensou is her manager.

Karen Ōkain – is a free journalist. She is working for a player who happens to be her childhood friend (original)

The cast of this game is taken from  SNK’s hit series The King of Fighters XI and KOF: Maximum Impact 2. It takes place in a hospital and is a mystery-romance story. This was designed to target a specific group in the female fan base. Also, the game was different in the as the pre-ending phase begins at an earlier date than other games in the series. The main character is a patient, injured due to being trampled by a horse in the beginning.

Elisabeth Blanctorche – she is a genius Doctor at the hospital where the patient is admitted. She is strict and focuses on discipline and is very demanding.

LuiseMeyrink – is mysterious and takes care of the garden at the hospital. She is a profound singer and can sing songs which effects magically.

Malin – is an acquaintance of the protagonist.She has a secret crush on the protagonist. She gets jealous of any other girl he interacts with. She always likes to pull pranks on others with her gadgets.

Alice Garnet Nakata – is a nurse in training tending the room in which the protagonist is admitted.

Ayame Ichitsuka – is a priestess who provides religious needs for patients in the hospital(original).

TsugumiIchitsuka – is the younger sister of Ayame who constantly wears masks to express her emotions (original).

Days of memories: Boku to kanojo Koto no Koi (My love with her in the old city)

Athena Asamiya – is a popular idol to the main character.

Leona Heidern – she is shown an acclaimed swimmer.

Kula Diamond – she a popular model. In this alternate timeline, her age is changed to 18.

Angel – is a goalkeeper for this private school’s girls’soccer team, where the protagonist is also a student.

Whip – is a teacher of the protagonist’s class. She is depicted as very strict and carries a whip at all times.

Misato Shinro – she is the older sister of Haruka. she has a special talent in artistic gymnastics (original)

Rimururu – she works at a traditional Japanese dine inn. She is Nakoruru’s sister. They both also live together.

This is a part of three games as a trilogy in the series. It takes place at the same time as the game before it at another high school. The protagonist is a happy-go-lucky student who is willing to do any job given to him.

Mai Shiranui: – she is a popular girl in the class and is traditional Japanese beauty. She is also the protagonist’s classmate. She has a huge crush on their teacher, Andy.

Yuri Sakazaki: – is a friendly troublemaker. She is also the classmate of the main character. She has got many times making out with her teacher, Robert.

Mina Majikina: – is an introverted student. She treasures her fancy keyholder more than anything else.

Xiao Lon: – she is curious. But she is an unfortunate girl as she has many domestic problems.

Nakoruru: – she works at a traditional Japanese dine inn. She stays there with her sister Rimururu.

HarukaShinro: – is the clumsier younger sister of Misato. She is on the search for her natural talent (original).

As a trilogy, this game in the series relates to the previous two titles and concluded the story.It is staged at a place similar to the last two entries. The main character is the third year kendo student who is energetic and clumsy. He has to decide who he wants to spend his Christmas party with this year. The story in this game parodies the story of an American ABC network drama “one hot summer”. The game is very similar to the first Season 365 no Omoi game. A new member of the cast was added when the game was ported to Nintendo DS.

Rose Bernstein – a student who regularly rides the airship Sky Noah to school, giving her a celebrity-like status; attends the same class as the protagonist

Reina Takida – a tomboyish classmate of the protagonist who acts as his “guy” friend; she likes snowboarding (original)

Athena Hatsushiro – Athena Asamiya’s cousin who is a transfer student from overseas. She hopes to see and learn many things during her stay in Japan. DS exclusive character. Her surname, Hatsushiro, is a play on the Japanese word shodai, which means “original” and uses the same kanji.

This series was very popular in Japan. It was the first Japan-only(SNK) game to be ever ported to the Nintendo DS platform. These games were initially made available for cell phones for people to play in the free time in the tram or on the metro in Japan. But the first three games were ported the DS platform.

The series also contributed to the genre as well, as it introduced new gameplay interaction for the romantic love sim. SNK Playmore made days of memories it’s premier series till the release of the final game. SNK attracted many more new fans to its original debut games of character in the series. And increased their fanbase in this indie genre globally.

Continue Reading
You may also like...
Related Topics:SNK Games